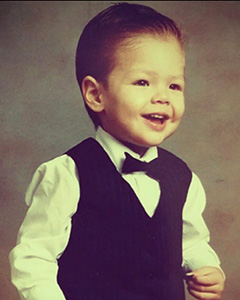 As one of the most recent additions to the KGV lineup, Jeffrey claims to have always known production was going to play a huge part in his life from an early age. Convinced his failure as a hockey player is what forced him and his mother to up and move from their Native homeland in Ontario, Canada, Jeffrey soon found himself behind the lens of a camera in order to cope with his ineptitude.

After several failed attempts at finding the man known as ISO, he soon learned his talents lie in the land of the cut. From editing his first music video for his rapper roommate outside a worn down bowling alley back in college, to digitally archiving on tour for his favorite top 40 artist around the world, Jeffrey can honestly say he’s had many circles of opportunity over the years.

But nothing, he claims, compares to his new home at KGV. With a constant desire to learn and love, he’s found comfort in knowing his family strives day in and day out to provide him the right tools so he can continue to best tell his own story in the highest resolution possible.

And they have snacks. Like a shit ton of snacks.